Google Project Brillo for the Internet of Things

No one can deny how much our lives have changed since the Internet first appeared, especially if we consider the way we consume data nowadays. Google has been at the center of all the changes throughout the years and the next steps in the evolution are going to be seen in the so-called ‘Internet of Things Revolution’. However, other important companies like Samsung, Apple or Facebook have announced strategies to be part of the Internet of Things space too. The Internet of Things refers to devices connected online without a typical user interface. By examining your usage routine, these devices collect data that help improve your lifestyle. The main purpose of this new tool is the potential creation of a ‘smart home’.

At the Google I/O, the company recently announced Brillo as the ‘underlying operating system for the Internet of Things’ and its developer preview will be launched in Q3. Developers will be offered the necessary tools so that they can test it. This platform is based on Android in order for manufacturers to be able to work easily with it. Also, it will incorporate a framework similar to Apple’s HomeKit, which is able to connect different smart gadgets together.

The key of an operating system based on the Internet of Things is the hardware not having as much power as a computer or a smartphone. Brillo can run on very low-power devices and power can be obtained by simply connecting to the Internet or using our own devices. It is also possible to choose from a wide variety of hardware platform and silicon vendors.

In addition, Google has created the platform Weave, a shared language for the Internet of Things that is going to help connected devices communicate with smartphones, the cloud and vice versa. Device makers will have to adhere to a certification program if they want the Weave program to drive interoperability and quality. Since Weave is integrated into Google Play, Android devices will automatically detect Brillo and Weave items. Furthermore, it will be easily available for iOS. 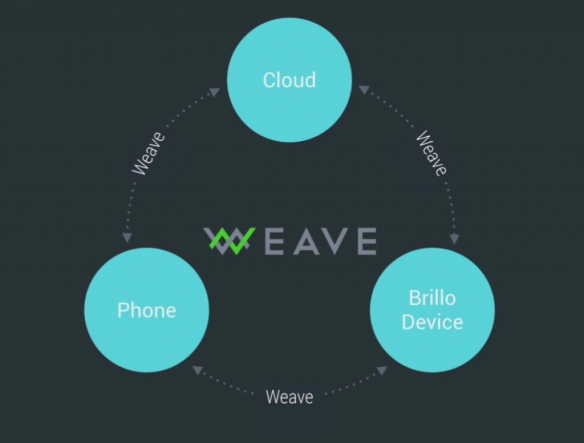 The fact that Google acquired without explaining much about it the company Nest, which is known by its smart thermostats, is also relevant for the development of Brillo. Recently, the release of a Dropcam style security camera was leaked and it is intended for this camera to replace the basic Dropcam and the Pro models. Surprisingly, Dropcam was purchased by Google and Nest. The main changes are expected to take place in the user interface of the mobile devices as well as in the recording technology. A newly created ‘Nest app’ will be designed to control cameras and thermostats.

Nonetheless, for a smart revolution to take place an agreement on a common set of terms and conditions needs to be reached by the growing number of companies involved in this project. Due to potential profits of this new business niche of the Internet of Things and smart homes, companies are willing to invest in order to continue developing these areas.